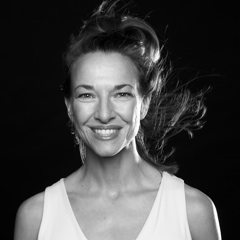 Tina is danish/american living in Denmark. She has studied method acting in California, classical acting in London and physical theatre in Copenhagen. She got her first stage fight certification with the British Academy of Stage Combat in London in 1985 and with the Society of American Fight Directors in 1987. In the early 1990s, she started doing workshops for Peppe Östensson in Linköping, Sweden, and Mån Teatret in Lund, Sweden, as well as many other projects, theater productions and ongoing classes. From 1992-1995 and again from 2005 to 2013 Tina worked with the Royal Danish Armoury doing demonstrations and theatre productions with various weaponry involved. She got her teacher certification in 1996 with the SAFD.

Tina guest teaches at the Opera Academy, Copenhagen; State Theater Schools, Copenhagen, Århus and Odense; The Royal Danish Theatre; at public and private schools for children and adults of all ages and abilities; medieval centers; various fight/tournament groups in Scandinavia in sword technique on horseback and on foot. She performs historical demonstrations/shows (also on horseback), is singer and voice over artist.