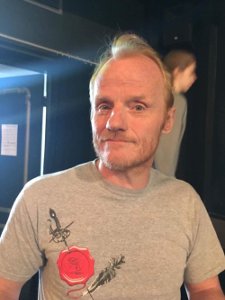 Bo Thomas (b. 1966) is a freelance stuntman, stage fight performer, actor and choreographer in both film, television, theater, shows and live reenactment. Since 1985 Bo has coordinated, choreographed and performed in more than 350 productions.

Bo teaches stunt, stage fight, physical performance and slapstick to actors, opera singers, ballet dancers, students and children. He also performs in stunt and fight shows as well as historic weapons demonstrations for schools, institutions and medieval museums in Scandinavia and on few occasions in U.S.A.

Bo became a certified teacher in 2000 and NSFS Fight Director in 2021. He has since taught regularly on all levels at the annual NSFS summer workshop, and took an active part in the development of the Theatrical Martial Arts syllabus, which is taught at intermediate 2 level. As a NSFS teacher Bo has also taught at the Paddy Crean workshop in Banff, Canada.