Participants take classes based on their prior stage combat experience and education. In all classes, emphasis is put on combining safety, artistic value and technique.

When registering for the workshop, you are asked to list your previous training and choose a class to participate based on that training. The workshop consists of two types of courses.
There are three certification courses and four showcase courses for different levels of experiences.

Besides course-specific training, days will include a common warm-up and warm-down, some days include choose-your-own-adventure type special classes with varying topics. You will be asked for wishes for these classes in registration form – and during the workshop. During the second week of workshop, special class slot will turn into own training, which will be choreo training focusing either to a certification examination (for certification courses) or to the showcase performance (for showcase courses).

* For details, see NSFS handbook or send a message to info@dramaticcombat.fi.

If you have any questions regarding the requirements and whether your prior training and tests fulfill them please contact workshop staff at info@dramaticcombat.fi and we will help you out.

Some changes to these might still occur before and during the workshop. 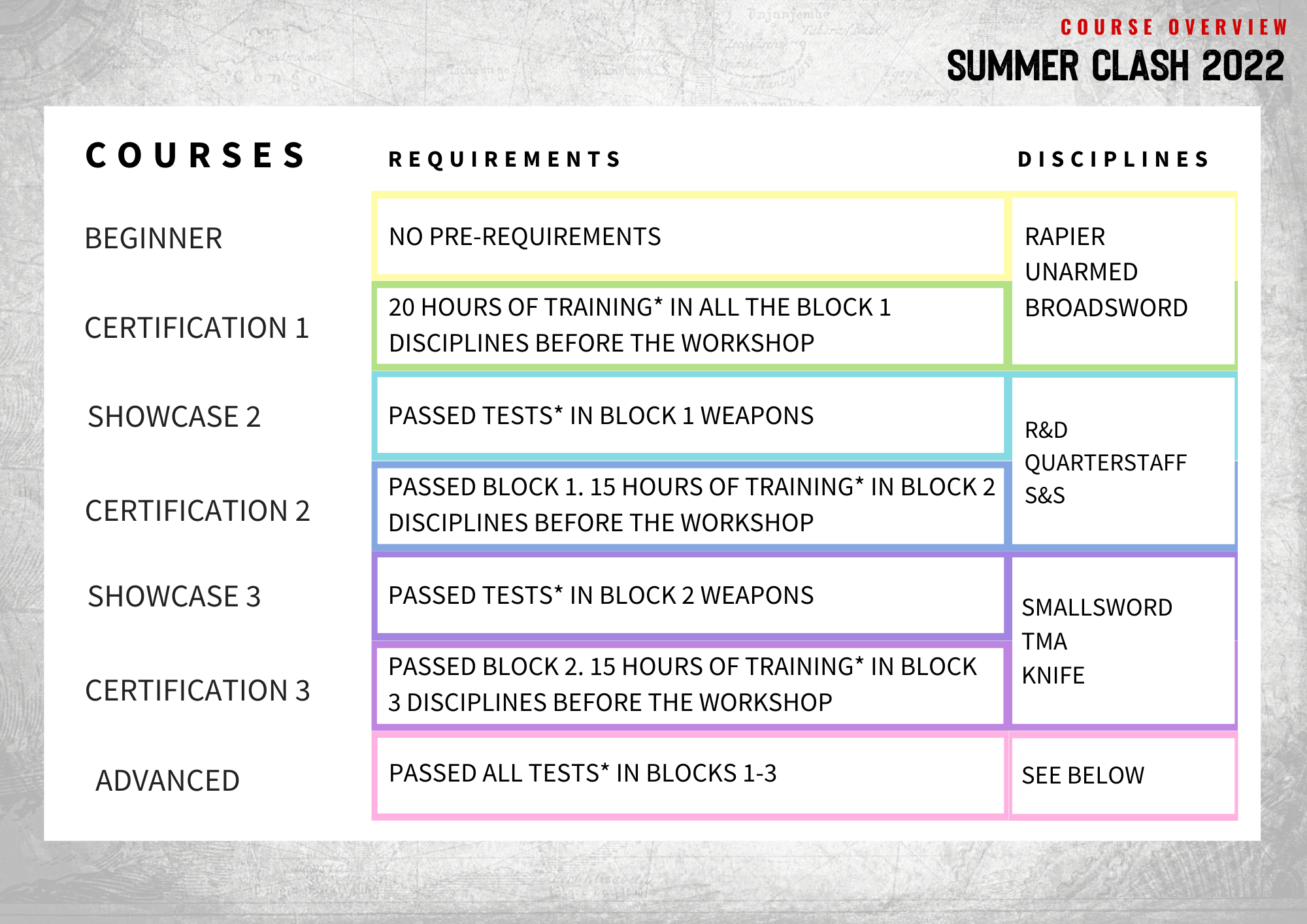 The Showcase Courses will finish in a showcase performance in front of a live audience during the final day of the workshop.

Some of these courses might join the corresponding certification course during the first week when they go through the basic curriculum in terms of weapon disciplines. During the second week the work continues in the direction of showcase performance when the certification course participants will focus on their tests.

Showcase invites a live audience to see all the skills learned during the workshop put into practice. Even though the participation in the showcase is voluntary it is recommended because the performance itself is a very useful training exercise and the second week of training puts a heavy focus on the showcase preparations.

You can register here, download the schedules in pdf form here and see schedules as a Google Sheets table here.

Beginner course is the start of the journey. During the course a student will learn the basics of block 1 disciplines.

The Beginner Showcase will follow their own syllabus different from Certification 1 course.

The Showcase 2 focuses on the three block 2 weapon disciplines which all use two hands.

The course works together with same material as Certification 2 course but focuses during the second week to the Showcase performance.

The Showcase 3 course will consist of training in the three block 3 styles, and more stylized and precise acting choices.

The course works together with same material and with the same schedule as Certification 3 Course but focuses to the Showcase performance during the second week. 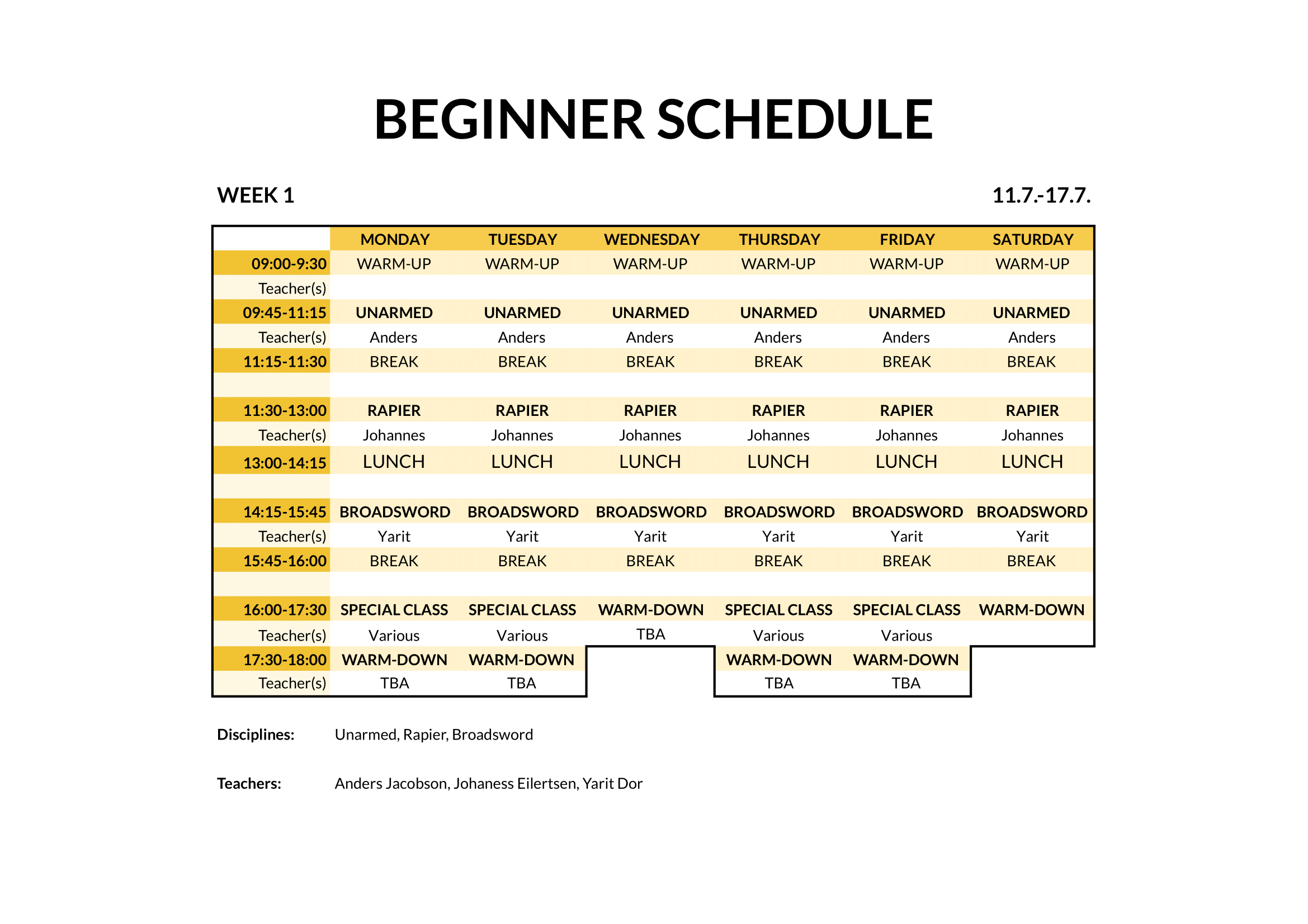 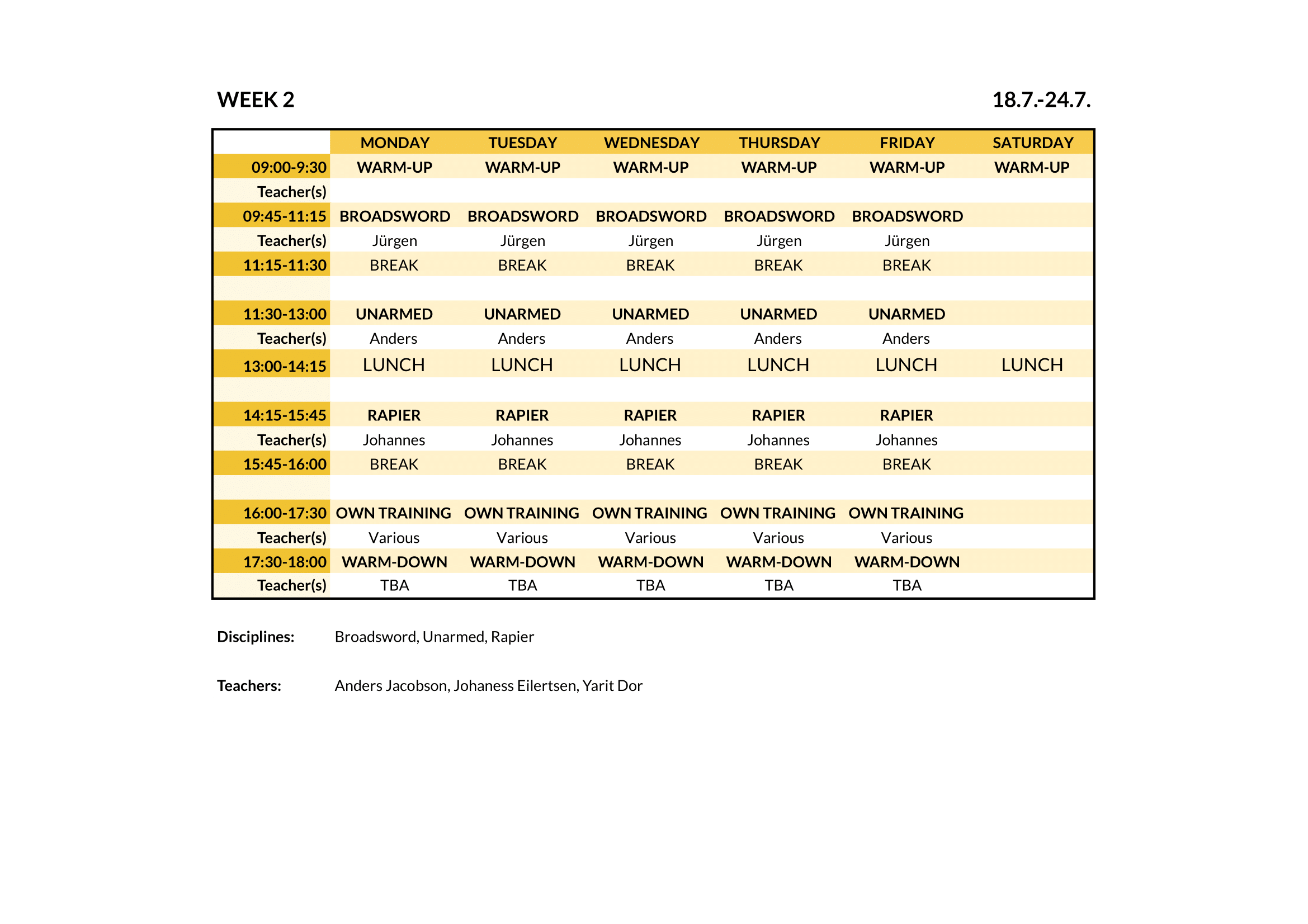 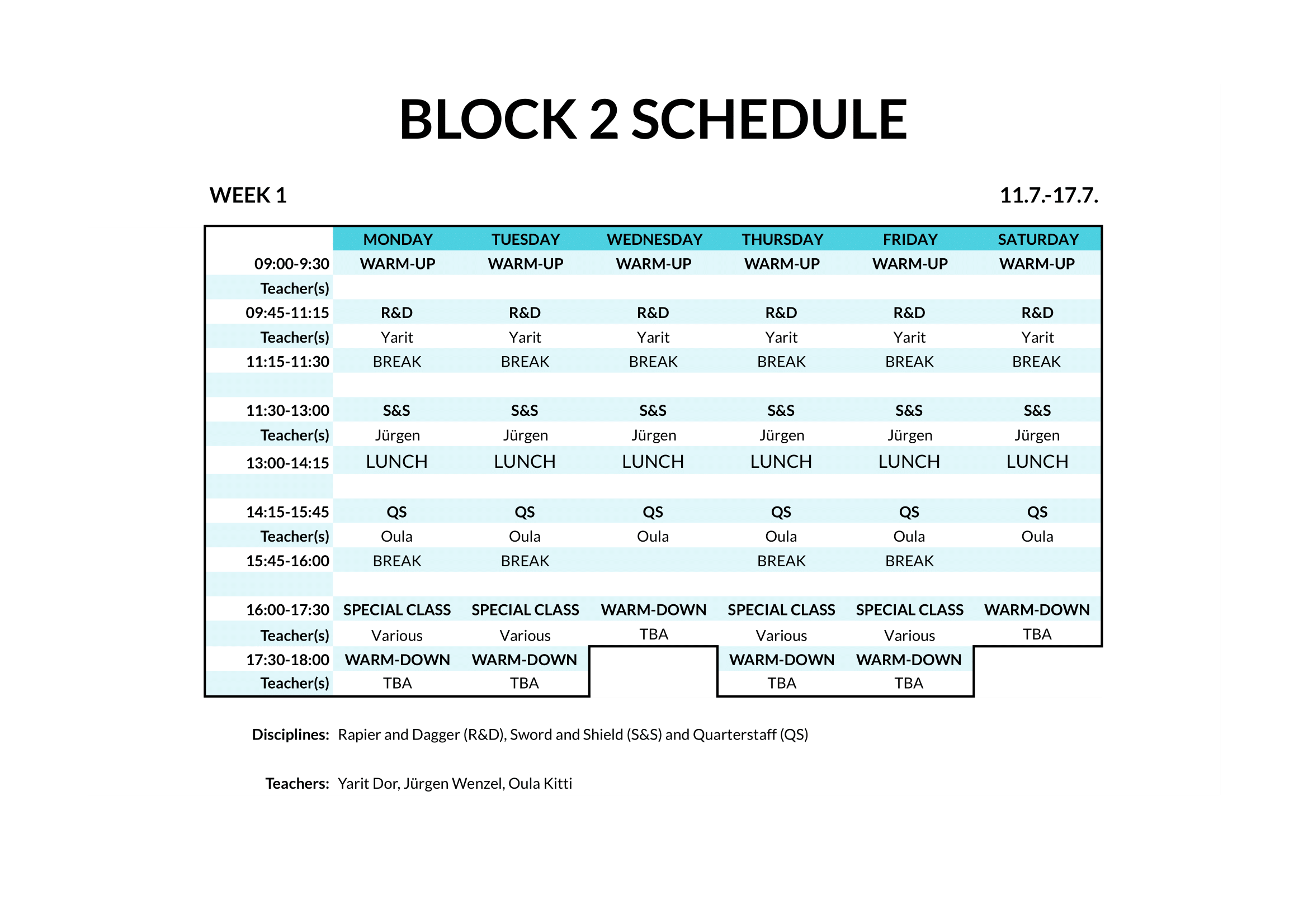 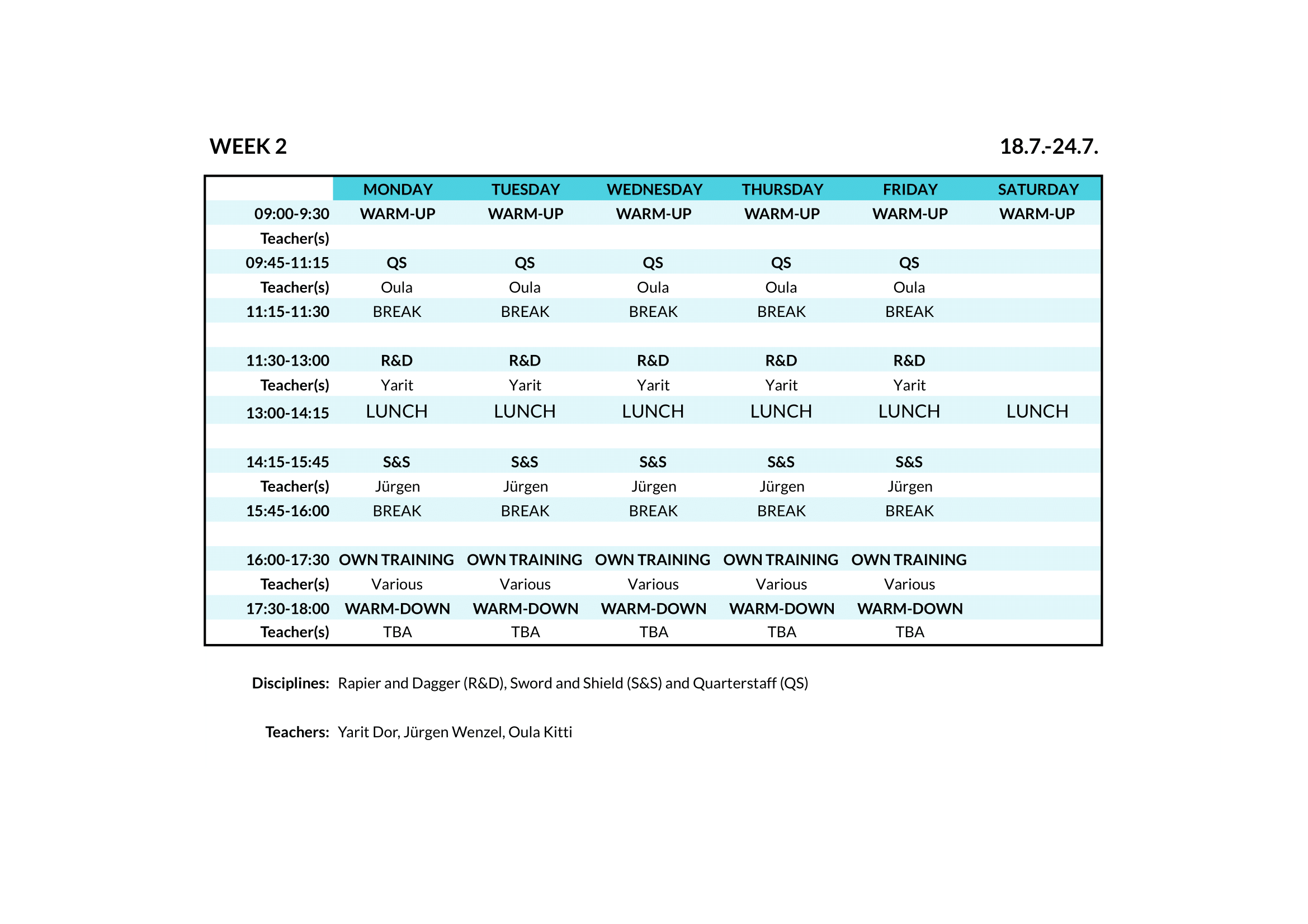 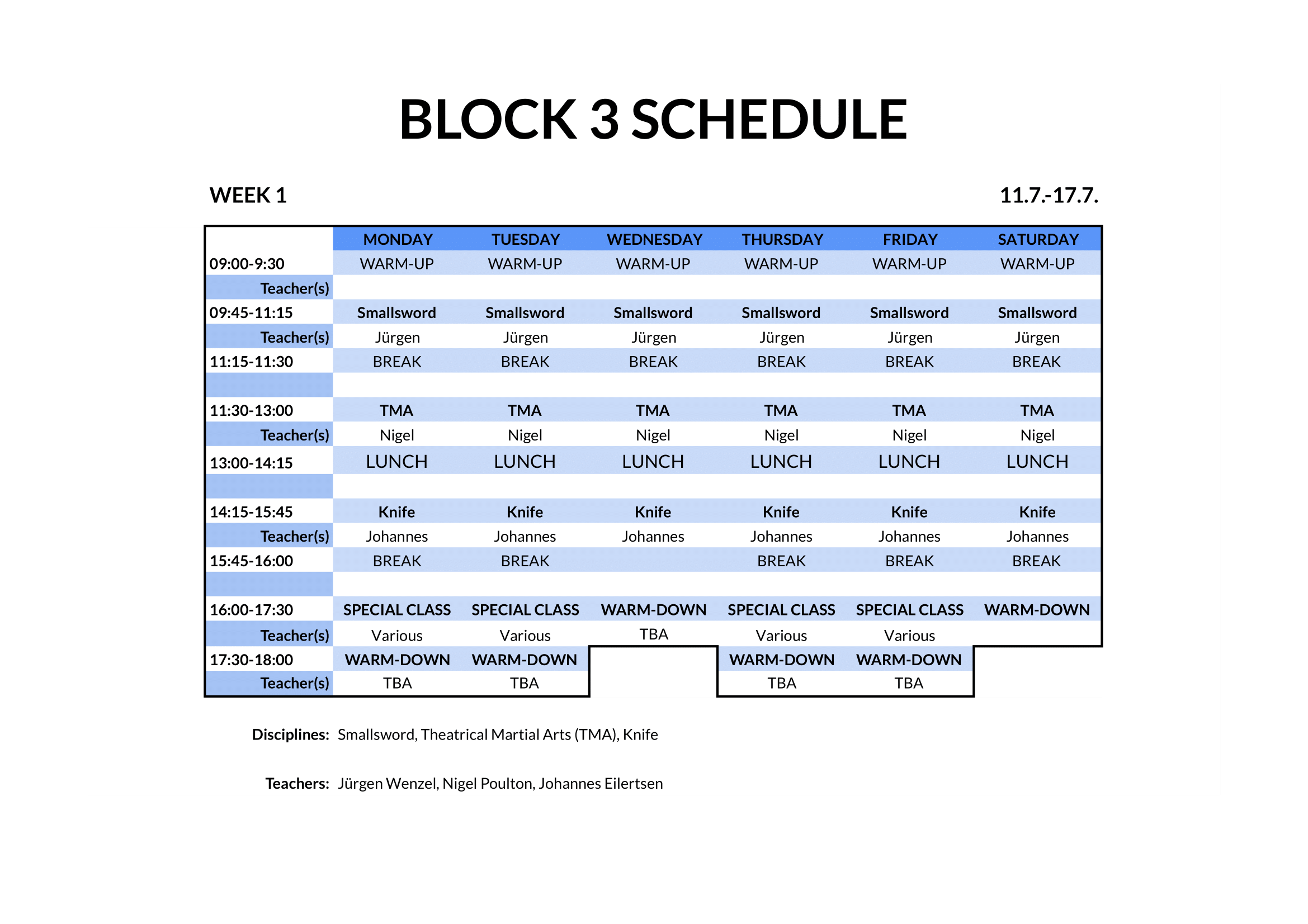 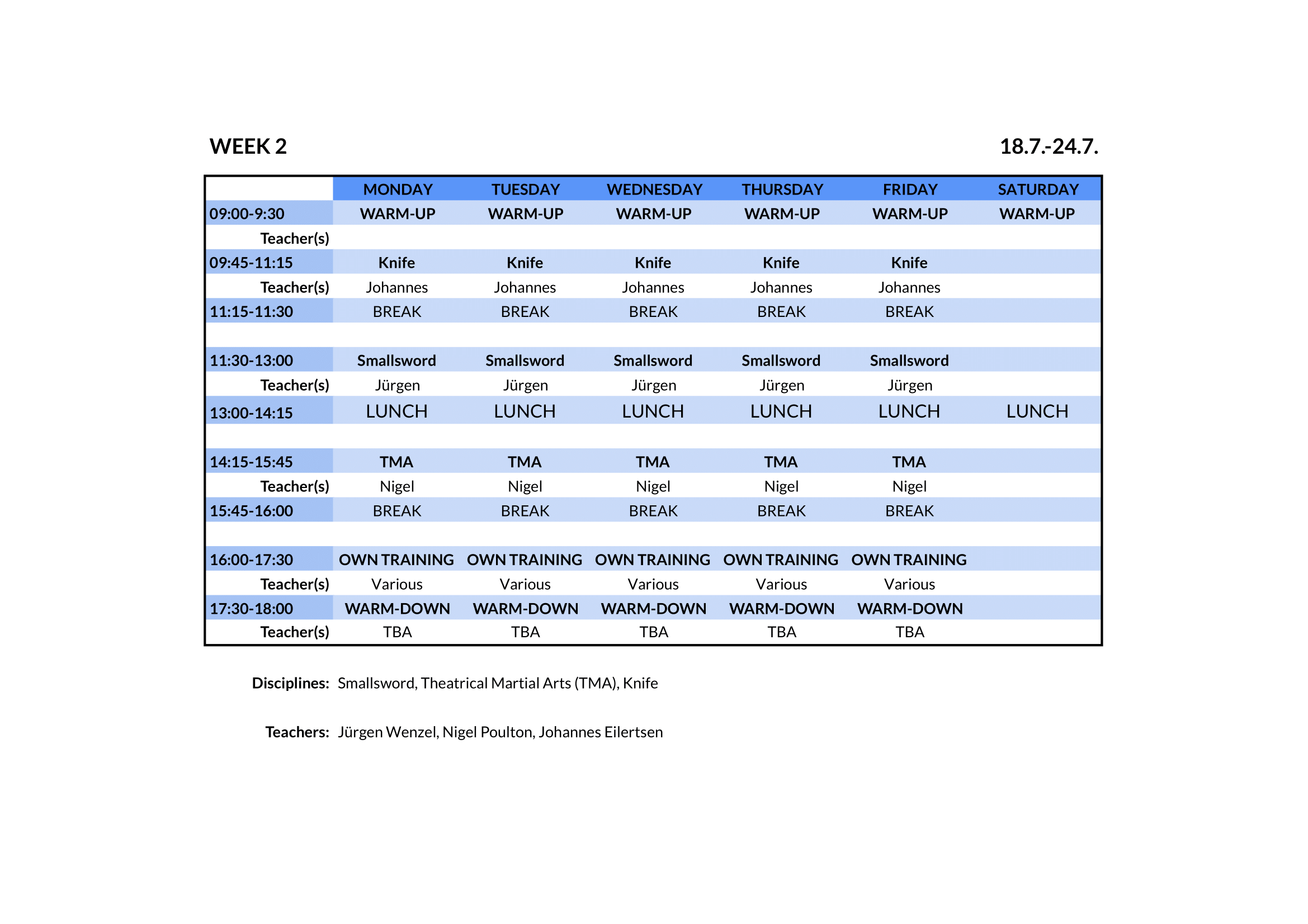 The advanced course will consist of training in a variety of weapons and fight performer skills.

During the second week the focus will shift into live stage work. This week will look into historical fighting styles, highly stylized stage combat and swashbuckling. The final product of the second week will be a part of the showcase. 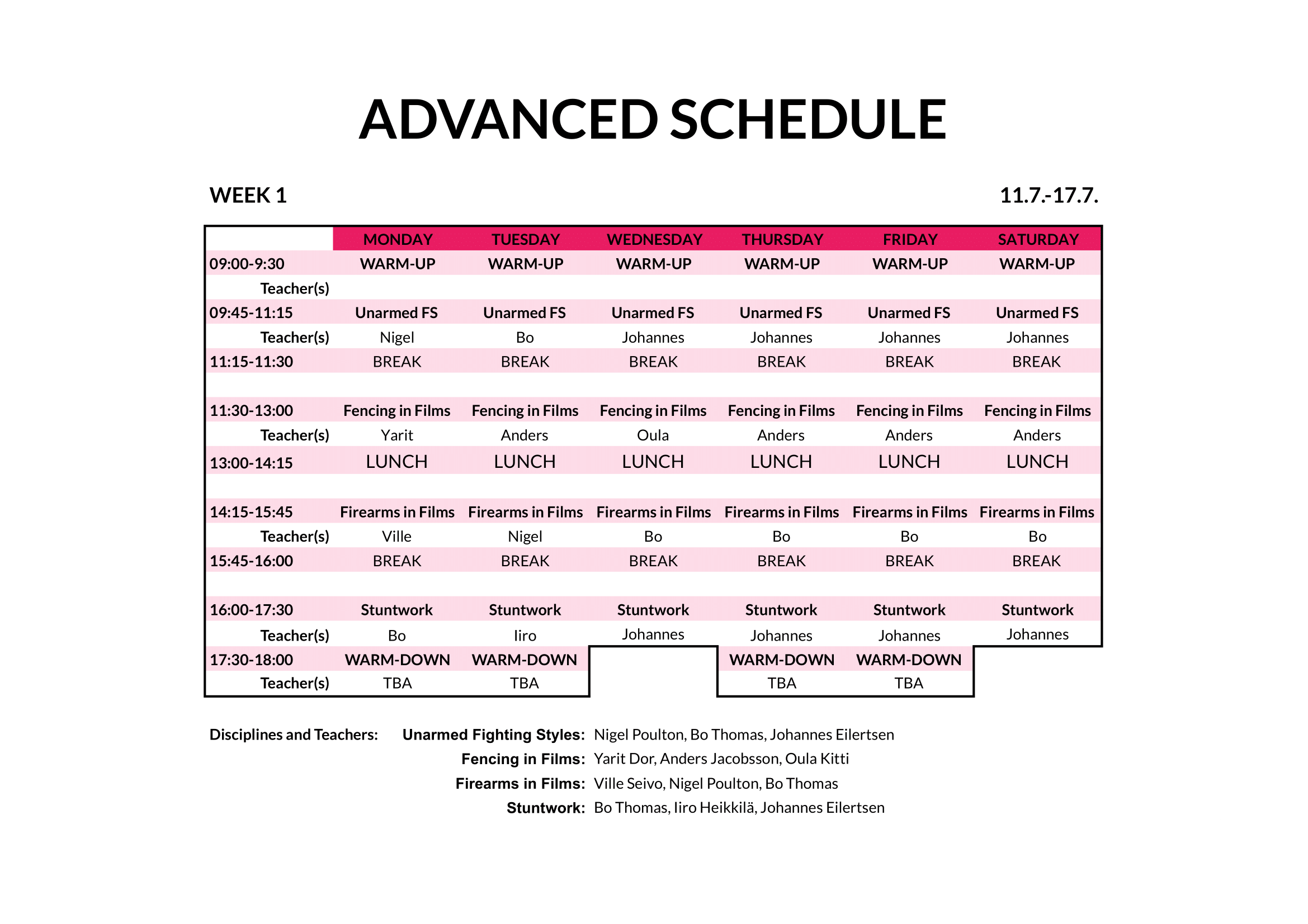 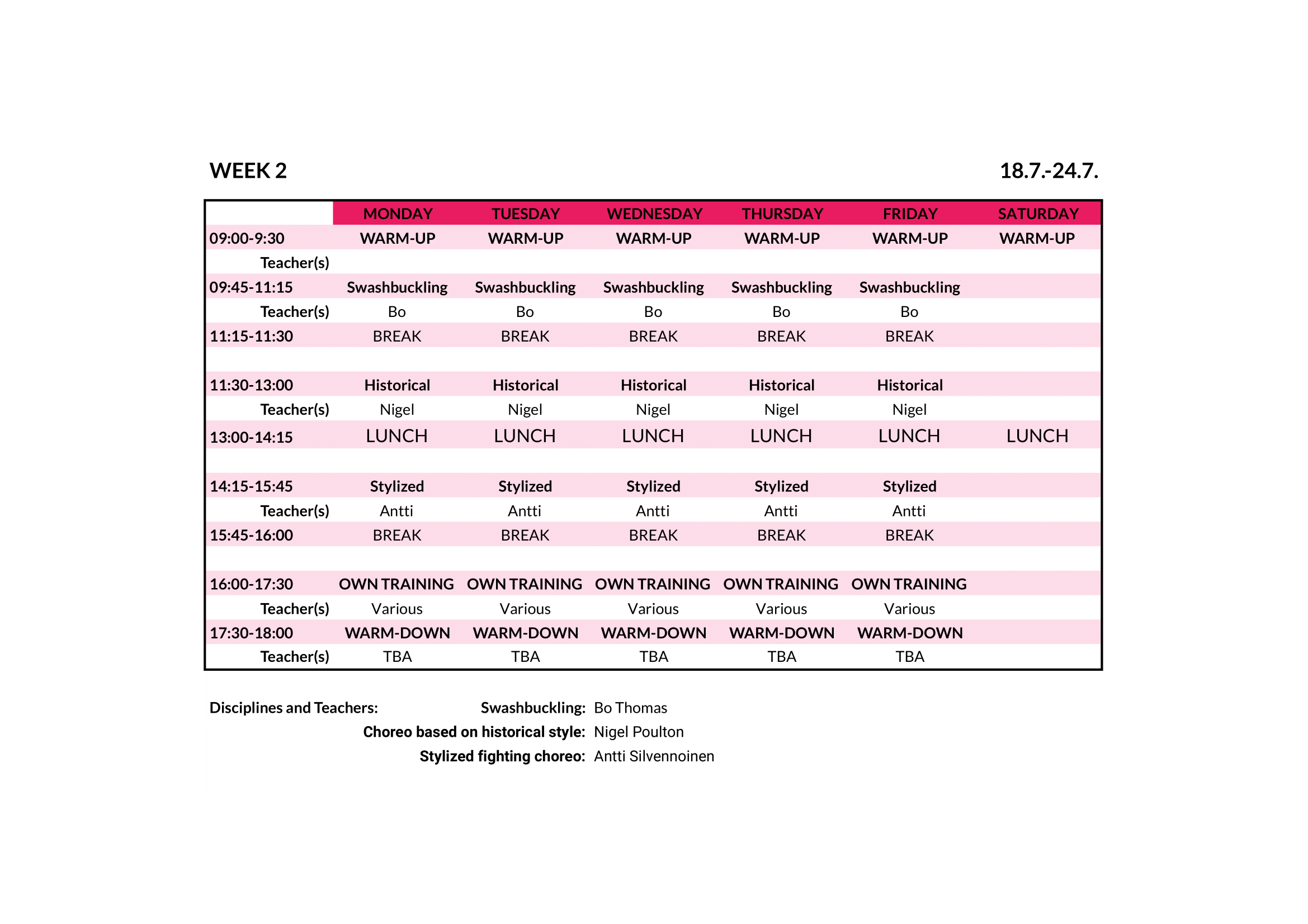 Every course will start recapping the basic techniques specific to the weapon disciplines. At the end of the first week the teachers will introduce a set of moves, a test choreography.

The test itself will consist of training this choreography with a partner, creating and practicing a short scene around it. The final scenes are performed in front of a group of judicators on the last week’s Saturday and will be graded in terms of safety and performance potential. A “safe pass” is when the performance has all the basics of safety and coherent story-telling down. A “performance pass” is when the scene shows a higher level of stage combat techniques. See more details about the grades in the NSFS handbook.

If you have any questions regarding the requirements and whether your prior training and tests fulfill them, please contact workshop staff at info@dramaticcombat.fi and we will help you out.

You can register here, download the schedules in pdf form here and see schedules as a Google Sheets table here.

The Certification 1 course is the first formal step of a student’s journey. It will finish in three NSFS certification tests in block 1 disciplines: unarmed, broadsword and rapier. Naturally a student doesn’t have to do all the tests at the same time but can test just one or two of the disciplines.

The Certification 2 will test the skills in block 2 disciplines: rapier and dagger, sword and shield, and quarterstaff. These movement styles are seen as more complex than ones in block 1 where the focus is more in a fluent use of basic language of stage combat.

The Certification 3 will focus on the disciplines of theatrical martial arts, smallsword and knife. All these styles use more stylized acting choices than the other blocks. Physical storytelling should convey feelings of danger and threat while working with weapons that look much less threatening than the weapons from the other blocks. 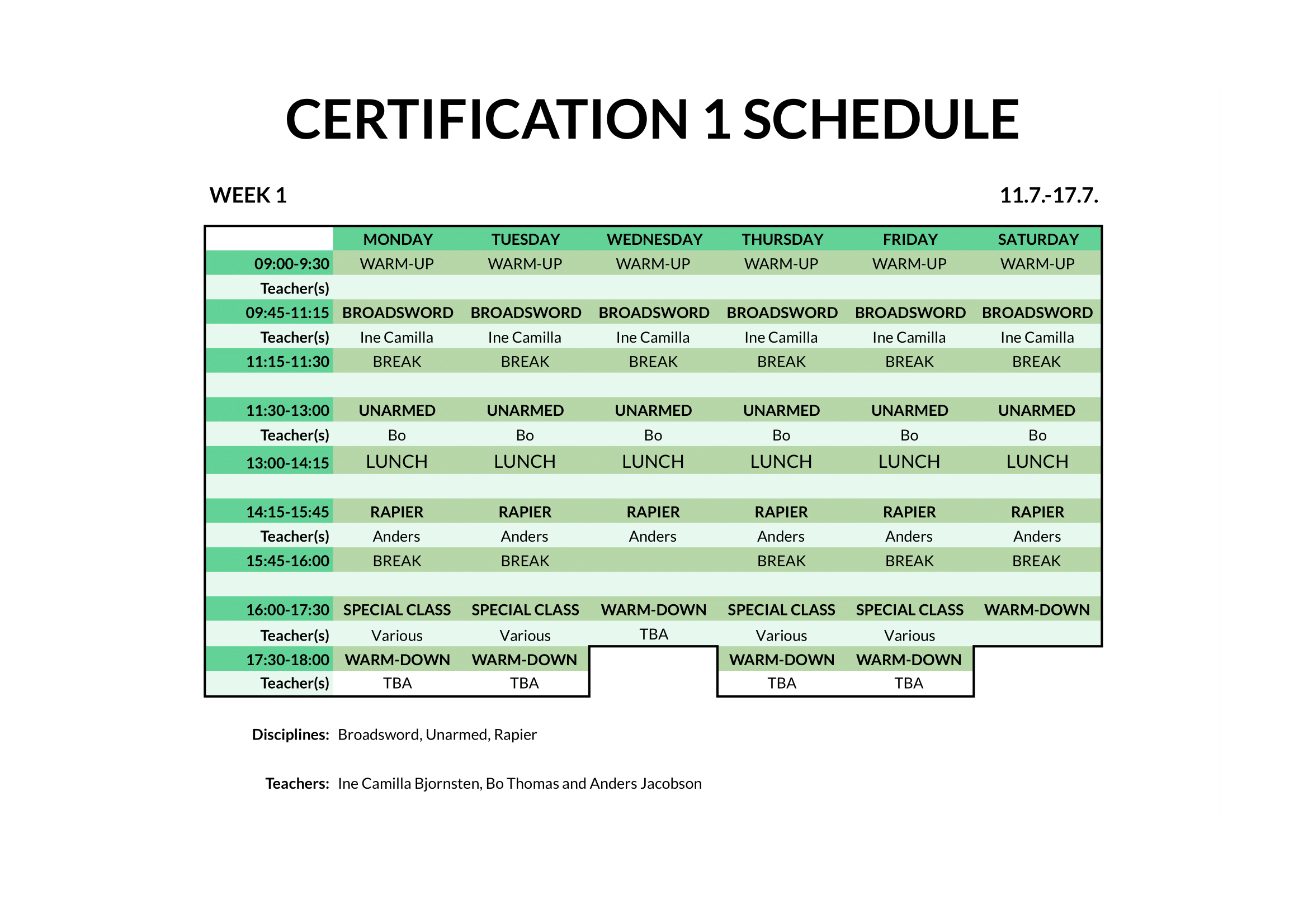 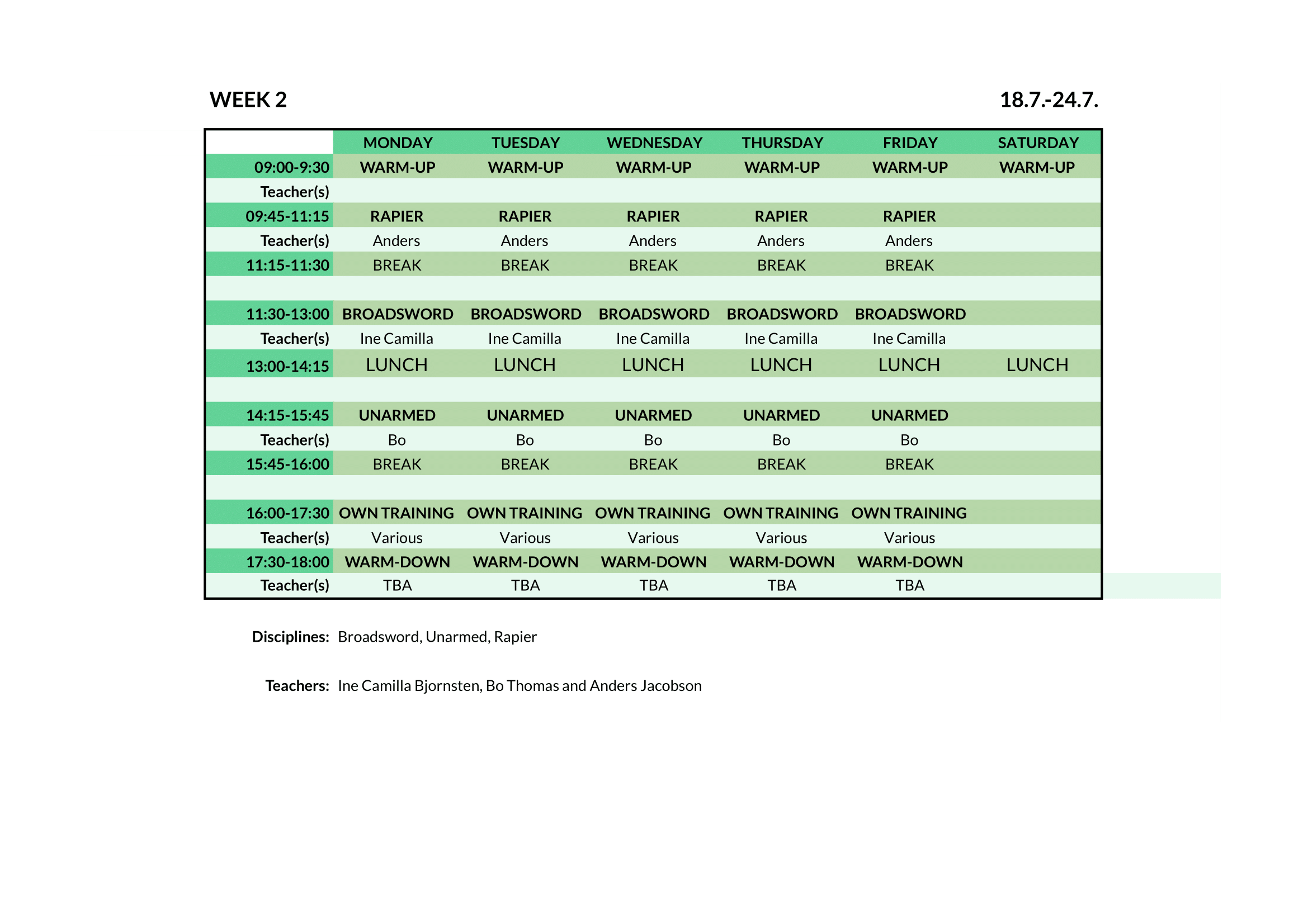